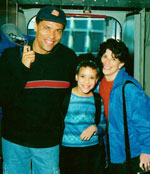 Helping Others: A Behind the Scenes Story by David Barbour
Reprinted from Lighting&Sound America – April 2008

As the money has started to come to Behind the Scenes, the Foundation program designed to help industry members in need, so it has started to roll out, providing crucial assistance in times of trouble. One of the program’s beneficiaries, Christine Lando-Marshall, recently agreed to tell her story to Lighting&Sound America.

Lando-Marshall, a painter and archival framer, is the widow of Al Marshall, a filmmaker who was also a member of the executive board of IATSE Local 16 in San Francisco. “Al was a versatile guy,” she says. “He did video, he directed, he worked in front of and behind the camera. People loved working with him; he’d walk onto the set and bring a sense of calm.”

The couple was married for over 20 years and lived in San Francisco with their daughter, Leigh Marie. A person of robust health, he became troubled by a persistent cough. The couple consulted a physician friend, who ordered a battery of tests that revealed he was suffering from an extremely rare and advanced form of cancer, and nothing could be done for him. “The doctors were very clear that, even if he had come in a year earlier, the outcome would be the same,” Christine says.

Stunned, Christine was determined to find a course of treatment. An oncologist held out little hope (“The doctor said, ‘We don’t even know how you’re alive,’” she recalls) but agreed to a second appointment. When the day arrived, however, the illness overtook him. “I could see him literally leaving his body,” she says. The family was together at the end: “He was himself up to the very last breath; he wasn’t doped up on medication.”

Having lost her husband of 23 years, with an adolescent daughter to raise, Christine says “Then I was faced with the reality of my circumstances. The phone was ringing off the hook with calls from friends. There were emails, and hundreds of cards. People couldn’t believe it had happened—I found myself wanting to make it better for them. We had a wonderful memorial mass, and, a few days later, a tribute at the union hall. There so were so many men speaking from their hearts, because they loved Al so deeply.”

At the same time, there were practical issues to be faced. “We have a house, which was built in 1896; we were very proud of it, and I was determined not to lose it. Al and I had not prepared for this and we faced so many unknowns. He was 54 when he passed away, and I found out his pension was cut because he wasn’t 55 when he died and then slashed again, because the surviving spouse gets half of that.

‘Ed Raymond at Local 16 told me about the Behind the Scenes Foundation,” she continues. “As I was getting our estate in order, I filled out the summary of need form and faxed it in. They review these applications to see if you’re eligible. I got a call from Lori Rubinstein [a Director of the Foundation]; she said, ‘I’m calling from London, but I want you to know that the review committee says you’re definitely eligible.’ She encouraged me to fill out the application as soon as possible.”

The call from Rubinstein alone provided crucial psychological support, says Christine. “The fact that she cared—and she was someone who wasn’t family or a friend—made me feel a little more safe inside. I will never forget that phone call. I did the paperwork and got a call from another Foundation Director, who had a couple of questions. Once again, the conversation was great. I had never met him, yet he had such insight. He told me, ‘You have to focus on building your business and taking care of your daughter.’”

The money Behind the Scenes provided allowed her to pay her property taxes. Later, in another conversation, Christine provided Rubinstein with an update on her situation. “She told me that they don’t typically give second grants but my situation was unusual and they were reviewing it.” Aware that Christine’s COBRA coverage would run out at the end of the year, Christine was reminded that although a grant had been made, she could apply for additional grants. This grant allowed her to pay her and her daughter’s health insurance for the period between the end of COBRA and the beginning of her widow’s benefits from the union.

Christine is still adjusting to her loss (“Twenty three years were not enough for Al and me,” she says. “Every day was a gift.”), but her life is moving forward. She’s kept their house. Leigh is doing exceptionally well in school and recently had produced a play, based on the family’s experiences. “I miss him deeply, but I know he’s fine,” Christine says. Thanks to Behind the Scenes, Christine and her daughter were able to make it through turbulent times and plan for the future.

Copyright 2021, Behind the Scenes Foundation. All Rights Reserved.