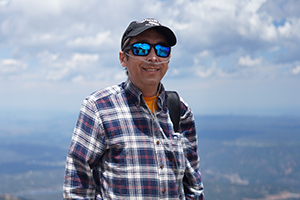 Cris Dopher. Lighting designer, technical director, scenic designer, CAD manager extraordinaire and one of the founding members of the Long Reach Long Riders, passed away August 25th after a long illness. Some might say he succumbed to complications brought about by Cystic fibrosis, a disease he lived with for a long time.   But I don’t think that’s quite accurate. Cris did not succumb. He faced the inevitable with courage, tenacity, humor and a gentle stubbornness. When it was time, he accepted his fate.

Cris faced life, and all the challenges it threw at him, with a seemingly limitless supply of perseverance. It didn’t matter if he was working on his beloved Harley Davidson Sportster, Roxy, (Every. Single. Night. on the LRLR rides) or was rolled down a hospital hallway on his way to yet another procedure or surgery. He took ownership of whatever journey he was on making it the best it could be, not just for himself but for everyone involved.

Cris, was a champion for Behind the Scenes; raising money and awareness while riding Roxy on the LRLR or, in later years, in a chase car. He also worked tirelessly with Cystic Fibrosis organizations, raising money and offering physical and emotional support for other CF patients. He shared his double lung transplant experiences with those who were preparing for that operation, and he was there for them afterward.

Cris had a down-to-earth sense of humor. When he was relegated to riding in a chase car on this past LRLR ride, which took place mostly above 10,000 ft, he was happy to point out that, since he was already on oxygen and had his own tank, he didn’t have to worry about altitude sickness. 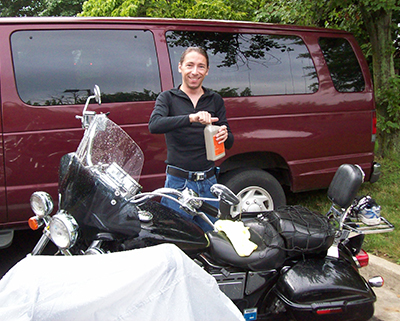 But I believe his legacy will prove to be his writing. Over the last year of his life, Cris took to social media with a blog that spoke of his life experiences. His was an upbeat pragmatism that gave us all a look into his heart, mind and soul. He spoke about living with CF. About watching his CF family pass away, one by one. Even when describing his body’s rejection of the new lungs, his words were clear, humorous and without rancor.

The phrase “only the good die young” could not be more appropriate. At 47 he lived longer than he expected, but it was still much too short. Cris was a compassionate, strong and passionate individual and we all are the better for knowing him. His memory will live in his words and deeds and that image of him sitting on the ground working on Roxy yet again.

Thank you for being you, Cris. Know that you rode the hell out of it, as I’m confident you are at this very moment.

Editor’s Note: Cris’ family have indicated memorial donations may be made to the following charities: