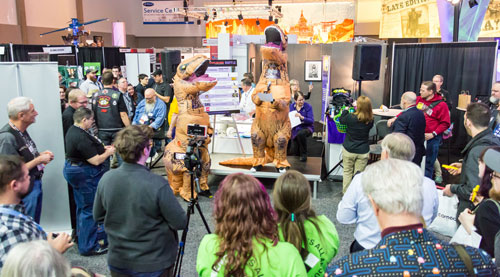 The Long Reach Long Riders (LRLR) celebrated their upcoming ride with a raffle and live auction to benefit Behind the Scenes during the USITT Stage Expo last week in Louisville, KY. A myriad of activities including sales of raffle tickets, a live and silent auction, challenge grants, swag sales, and sales of Neal Preston’s books, posters and prints raised over $18,000 for the charity. The LRLR 2019 ride, dubbed the Altimeter Tour, starts on July 7th in Denver Colorado. The riders cover all their own expenses so everything they raise goes to the charity. Sponsor a rider today at www.behindthescenescharity.org/lrlr.

The booth featured a display of some of The Lightpower Collection’s iconic photographs by Neal Preston including those of Freddie Mercury, Brian May, Robert Plant, Bob Marley, Ray Charles and others. Neal’s books “In the Eye of the Rock’n’Roll Hurricane” and “Exhilarated and Exhausted” and posters of some of his most famous images were also available for sale.

Raffle festivities led off with the traditional kazoo parade led by Bill Sapsis and Eddie Raymond (yes, they were the T-Rex’s), and many of the LRLR. Following the parade, BTSPledge-a-Product partners ETC (irFR and aRFR application for iOS and Android devices), ACT Lighting (The dot2 Series of Lighting Control Solutions from MA Lighting) and InCord (Theatrical Safety Netting Systems) presented checks from the sales of their products pledged to BTS.

Live auction items included a hand-tooled seam ripper and serving tray created by Shan and Trish Ayers, a special pack of Amberient’s industry trading cards which included a signed Richard Pilbrow Rookie card, and a hand crafted pen and pencil set donated by Indianapolis Stage in association with Penchant4.com. Amberient also held a silent auction in their booth throughout the show featuring custom furniture made from old lighting equipment including a recliner made from a Kliegl Dyna-Beam. Bob Scales’ ever popular ghostlights were sold out by the end of the show.

Bill Sapsis (Sapsis Rigging) and Reid Neslage (H&H Specialties) announced their challenge grant to the crowd just before the raffle began and the attendees ponied up to make sure they had to pay.

The winners and their prizes are:

Special thanks go to USITT for making our presence at the show possible; to The Lightpower Colllection, Neal Preston, Giulia Calani and Shepard for making the exhibition of Neal’s work possible;  to Moe Conn, Kim Craigie, Mark and Alison Heiser, Alice Neff, Greg Williams, and Bill Sapsis, for their invaluable help; to the donors of our fabulous prizes; and to all who bought raffle tickets, auction items, and swag.