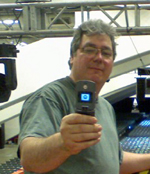 When you’re young and bullet-proof, the last thing you think about is what might happen should you become unable to do your job. But it’s something everyone should plan for. How will you pay your bills? How will you feed your family?

Behind the Scenes is a program to provide emergency financial support when illness or injury strikes entertainment technology industry professionals. The program was there for Uwe (pronounced Ooó-vay) Willenbacher when he needed it most. He was riding his motorcycle, when, through no fault of his own, he was in an accident. We’ll let Willenbacher tell what happened from there.

Uwe Willenbacher: I’m doing much better; I’m starting to get back to work on the 27th of (June).

How did all of this come about?

It’s the San Francisco stage hands union, yes. I’ve been in the business for 20 some years, but I got tired of touring, so I joined the union. And I was on my way to a meeting, and on the way, minding my own business, somebody cut me off making an illegal left turn and I got into quite a mess – a terrible motorcycle accident. It totaled my motorcycle, broke my ankle, compression-fractured my L1 spine, and fractured my thumb. I was pretty lucky to get out of that alive.

When did this accident happen?

On Dec. 5, 2007. And I made a terrible mistake. I watched [Michael Moore’s documentary] Sicko two days prior to the accident. That was the worst thing I could have done. I have health insurance through Local 16. But nevertheless, it was like, ‘Oh my God, what’s going to happen next?’ I was probably the worst patient in that ambulance or in the hospital. I was thinking about finances most of the time, not my body. Then I contacted Local 16, making sure my health plan covered it, and they said, yes, it’s covered. But I just missed by a couple of days, literally, the supplemental disability insurance. And then they said, ‘Look, we can’t help you from the union’s perspective, but contact Behind the Scenes.’ So I did. I was in the hospital for a week, and then another week went by, and that’s when I got my surgery on that ankle. I was in panic mode, afraid of losing my house and everything I had, because the last thing you want to hear when you’re laying in a hospital is, ‘You’re going to be out for four or five months.’

Is that because you had exceeded the limit of your insurance coverage?

Well, I had insurance, yes, but I would not be making money during the time I’m out. I didn’t have a huge buffer, and the bills keep coming. The creditors, they don’t care if you got hit by a car, or hit by lighting. They don’t care. They want their money, which I can understand.

Your concern, then, was with the lost wages, not the cost of the medical coverage?

You had lost two weeks of work?

No, I’m still on disability. I’m starting work again next week. I was losing wages due to my disability for at least three months, if not four. And it actually turned out to be five months. I could put no weight on my leg for three months.

You were covered by Medical insurance but you had no disability insurance?

And did they make up the total difference?

Yes. And on my birthday, Jan. 10, they sent me a (large) check. The timing could have not been better. I just couldn’t believe it.  I was in quite an emotional state, because of the drama of the accident, and I couldn’t believe it. I could barely make it to the bathroom, sitting there, and then my wife came in with the UPS letter, opened it up, and there was a check from the Behind the Scenes foundation. It was just incredible. And they have helped me for a total of four months. I’m still on disability, but I did not make a request (for the fifth month). I felt like I’m starting to get greedy here, and I’m somewhat caught up. But without the Foundation, I would have lost my house, period, because I could not make my payments.

When you contacted them, did you just place a phone call to them?

Ed Raymond, one of the officers of IATSE Local 16, gave me the Foundation Web address, and in it, there is an application for a grant. It’s a PDF page that you download and fill in the numbers. And they contacted me. They gave me a phone call and they said, “Oh, some of these numbers don’t look right.” And we adjusted them appropriately. I was as open as a book, as open as I could be with them, telling them, “This is what I owe, this is what I make right now, this is my wife’s income, and we’re X dollars short.” And then they just started taking it up, there were no questions asked. The trust is just immense, and wonderful.

You said you toured for a number of years…

I started touring here in the United States in 1984 with a company called Ultra Sound. They were located in San Rafael, and they toured with the Grateful Dead. I was with them for almost 10 years. I started out as a PA hanger, and then very quickly became the front of house setup/systems engineer. I toured with them until 1994, and then basically had to make a choice; my family or my profession. I think that’s a choice every touring person has to go through. I chose to then stop touring and got into the dot-com thing. I completely re-educated myself as a Unix systems administrator — I still do not know how I did that, but I did it — and I rode that beautiful crescent of the dot com wave and made tons of money, and my pay was raised much higher. And, like many other people, I didn’t spend all the money on stock and what have you. I didn’t play the stock market. I put it aside and just waited for the period like the one that we just experienced. But it was still not enough.

When the dot com thing went down, I didn’t want to find myself wanting to be the Swiss army knife, where you have to do everything for very little money. And then I figured, what am I going to do when I grow old? And I went back to touring until 2003 with rock ‘n’ roll bands and again with the Grateful Dead. And then I worked for Eighth Day Sound out of Cleveland. And then I said, “I’m too old for this.” You know, when you’re looking at the artist, and you’re kind of thinking you could be their father, it’s time to move on. Or when they willingly give you the back lounge of the bus because you snore too loud – it’s very subtle hints like that – maybe it’s time to move on. And then a friend of mine introduced me to Local 16, and it’s been the smartest move that I’ve ever made in my life – besides, of course, marrying my wife. [laughs]

When did you start with Local 16?

Now that you’ve had five months of recovery, are you going to recover 100 percent?

Well, let’s just say that nobody really comes out and says straight up. From a structural point of view, my bones have apparently healed. I have screws in my ankle, I can walk. But, it was really hard, because after three months of not walking, your muscles — you have no idea how fast they give up and start going to sleep. It was like learning how to walk again. I was limping along and couldn’t put weight on it. To this day I can’t do a simple thing like stand on my bad leg and lift my weight on my toes. I can’t do it.

I have been doing physical therapy for the past two months. That has been very, very helpful. We are figuring out small footsteps, learning how to walk again. And I don’t know — the disk is 30 percent reduced in height, whatever that means. It’s compressed. Will I be able to lift the same things? I don’t know. I probably shouldn’t anyway, because of my age. It’s L-1. That’s right where the ribcage stops. It’s the 5th disk from the very bottom, kind if in the middle, where you bend. I also had, in the hospital, what I call my turtle shell. It’s one of those shells where you absolutely cannot move. I had to wear that for three months.

Are you going to be able to do the same work when you go back?

I certainly hope so. I want to. I want to do another 20 years. I’m not that old. Again, the union has been very supportive. I’m now starting a theatre show here in San Francisco at the Post Street Theatre, which is the perfect way to ease back into the grind of the day-to-day job.

Do you typically do the load-ins and the hangs and everything?

Everything. As a union person, you do everything.

Are you able to specialize at Local 16?

Local 16 is one of the few mixed unions where you can do more. Of course, they’re not going to send me on a carpentry call or on a rigging call. I couldn’t do that. But theoretically, I should know all the crafts. Local 16 is a mixed union. It’s not as strict as New York, for instance, where it’s audio only, rigging only, lighting only, electrics only. You’re supposed to know everything, but… Of course, if they have a choice between an audio show and a load-in, pushing boxes, they’d send me to an audio show. They want to send the best people they can.

I think Local 16 is going to do a fundraiser for Behind the Scenes, and I’m definitely going to help. Without the Foundation…I had never heard of them before and all of the sudden, here they were, helping me. That was just incredible. And I know I’m not the only one. There must be thousands of stagehands and people working in the entertainment industry who have had accidents just like I had, work-related or not work-related. Mine wasn’t work-related. And without the Behind the Scenes Foundation, I don’t know what might have happened.